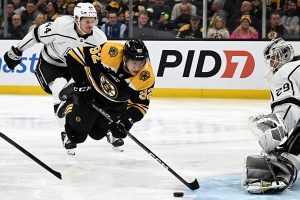 Today’s NHL Rumours circles around the Boston Bruins trades. Despite the injuries to Brandon Carlo and Tomas Nosek, the Bruins have been one of the best teams all year. Although, the players that called up have big shoes to fill, and there apparently is talk of trades being made if the issues still remain.

According to Fluto Shinzawa of The Athletic, there are a few trades that are on the table if the call-ups to fill roster spots don’t work out.

There has been one name that has been on the teams radar. Bo Horvat was mentioned in the article as a trade the Bruins could make to give support within Nosek’s role, if he is out for more than a month.

The benefit of Horvat with Nosek is that both of them are left shot centre, although Horvat is more of a high impact player than Nosek is.

The one issue they stated though is their cap issue, as when fully healthy, adding Horvat would not only require the loss of a lot of value,  but the Bruins would be cap strapped getting close to the playoffs.

One NHL Rumour surrounding the Boston Bruins trades is depth at the position. Instead of landing the big fish, they could look to getting a depth centre to replace Nosek.

One player The Athletic mentioned was San Jose Sharks forward Nick Bonino, which may work for Boston.

Bonino only has 16 points in 45 games this year. However, he is on a rebuilding San Jose Sharks team that needs youth and prospects more than anything. The Bruins prospect pool is not the best, but they have the assets to land him.

Bonino is a perfect rental for the playoffs. He can showcase his abilities on a contending team as he approaches free agency.