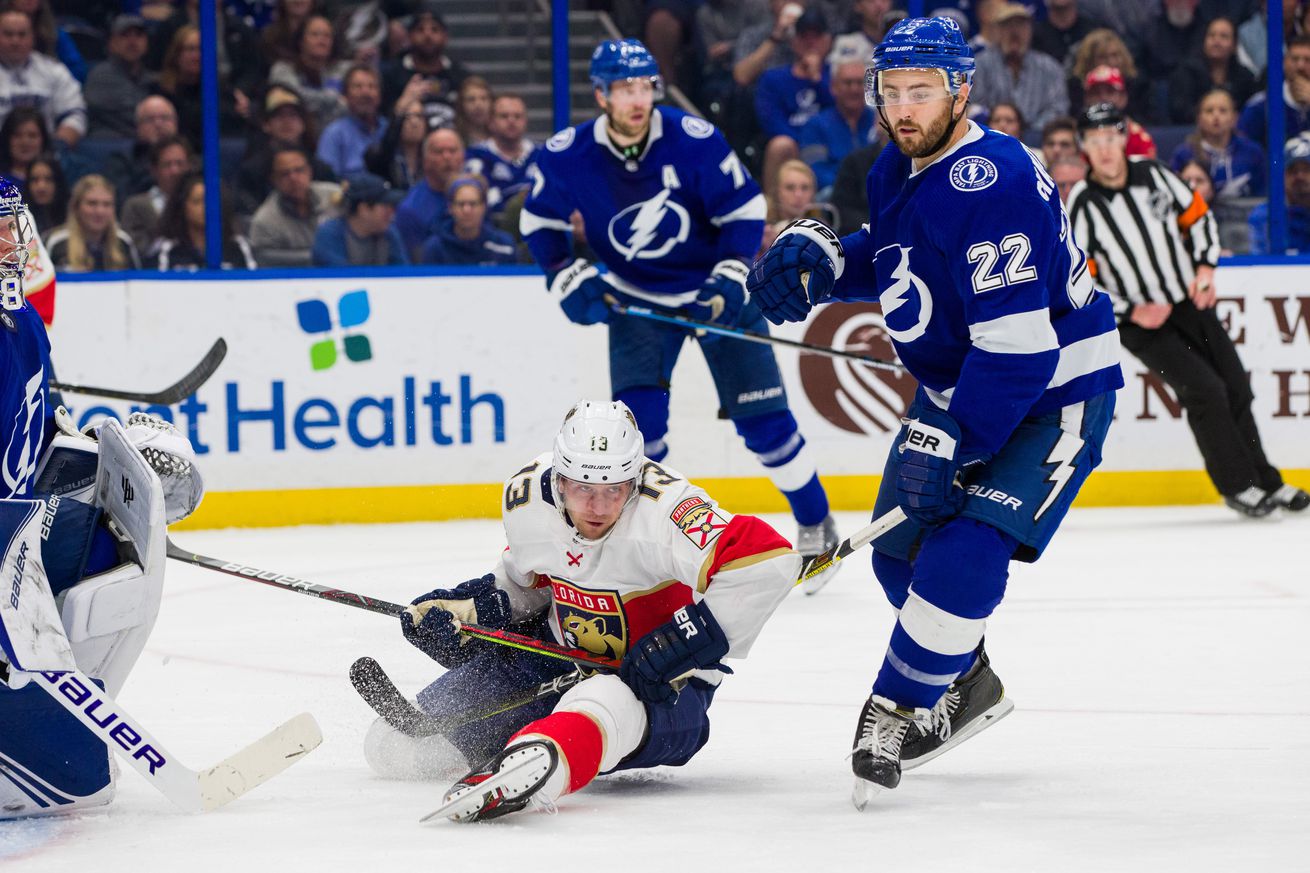 After four months the Tampa Bay Lightning finally get to play a team wearing a different uniform. They match up with the Florida Panthers at noon eastern time for their rivalry exhibition game. Even without Victor Hedman or Steven Stamkos on the ice, it’ll be a good test for the Lightning to see where their game stands prior to the round robin portion of the post-season.

The players are looking forward to, as Kevin Shattenkirk said, “finally getting to bump into a few guys that aren’t on our team and we’re not worried about hurting them.” For Coach Cooper, staying healthy is the number one priority. Getting a chance to play another team will also be a good measuring stick as to where their game is at.

Things are a little more urgent for the Panthers as this is their last chance to get in game shape prior to their play-in round against the Islanders. Expect a quicker pace than what we saw in the scrimmage games last week, but not quite full speed.

One of the favorites in the Western Conference starts their quest for the Cup with an exhibition game against the Minnesota Wild, a team that exists. The skaters for the Avalanche are all healthy for one of the few times this season while they still have a question in net. This could be an audition for both Phillip Grubauer and Pavel Francouz although, like the Lightning, the Avalanche have the round robin games to make a final decision.

Two Metro Division teams meet in a rematch from last year’s opening round of the playoffs. Don’t expect the same level of competition in this

The Blues kick off their defense of the Cup with a tune-up against Chicago. It’ll be interesting to see if Corey Crawford, who missed almost all of training camp, gets into the game. With just a few days of practice under his belt after he might only see a period of hockey in their only exhibition game before they try and upset the Edmonton Oilers in their play-in match.

It’s the battle of New York. It’s less than shocking that they have the prime time spot on day two of exhibition week. The Lightning could see either one of these teams in the first round of the playoffs so if you have nothing else to do, tune in and see how the competition might stack up. The Rangers have a decision to make in goal, and it isn’t inconceivable that all three netminders see some action.

We head out west for the last game of the night as the Winnipeg Hellebuycks take on Vancouver. While neither team is expected to make a serious run to be the Western Conference champions they both have some dynamic young players and if they get solid goaltending, could be a tough out.

With Stamkos and Hedman out of the line-up, the lines will be fluctuating a bit in the game today. In practice on Tuesday this is what they looked like:

Florida will be without one of their big guns as well as Aaron Eckblad will not play according to George Richards. [Florida Hockey Now]

Cory Conacher is heading to Europe. The Lightning/Crunch forward signed a deal with Lausanne in Switzerland. It was a good run for the Honey Badger [Raw Charge]

Edmonton defenseman Ethan Bear wore a jersey with his name spelled out in Cree in the Oilers exhibition game against the Flames on Tuesday night.

“It will be an honour to wear this jersey tonight,” Bear told the Oilers website. “I feel like I will be wearing it for all those Indigenous players who came before me and those Indigenous kids dreaming of playing in the NHL.”

Nick Cotsonika is a NHL.com writer embedded in Toronto. He shared the experience of watching the first hockey match in the Age of COVID-19. [nhl.com]

Once the puck drops and your eyes focus on the ice, the next thing you notice is the sound. In the building, it is silent during play, so you can hear pucks hitting sticks, skates scraping ice and players yelling. Let’s just say there is a reason there is a five-second delay for TV.

Prior to that game players from opposing teams stood next to each other during the anthems to “stand up against social injustice, racism and hate”. While the gesture was somewhat inadequate compared to statements made in other sports, it seems there might be more action this weekend when the official games begin. [AP News]

The league said it would feature Black Lives Matter and other social justice issues during opening ceremonies this weekend in Toronto and Edmonton, Alberta. NHL executive Steve Mayer expects other demonstrations to happen organically.

I’m going to take a moment to mention something outside of hockey. I grew up in Baltimore and still carry my Orioles and Ravens fandom with me despite having lived in many towns and suffered much disappointment since then. On Tuesday the Baltimore sports world lost one of the biggest fans they’ve ever been blessed with.

Mo Gaba passed away on Tuesday at the age of 14, just hours after being named to the Orioles Hall of Fame. Despite living with cancer since he was nine months old, and spending roughly three-quarters of his life in the hospital, the first thing that everyone said about him was how, despite his troubles, he was a bastion of positivity. He befriended members of the Ravens and Orioles and was a staple on local sports radio (making calls to 105.7 without his mother’s knowledge at first).

Gaba made national news in 2019 when he became the first person to announce an NFL draft pick from Braille.

The outpouring of condolences from fans and athletes alike on social media was overwhelming. The joy and pride that Mo had in talking about his favorite teams (he predicted 45 wins for the O’s this year) is a reminder that sports can be good and provide solace for those struggling with real life problems.