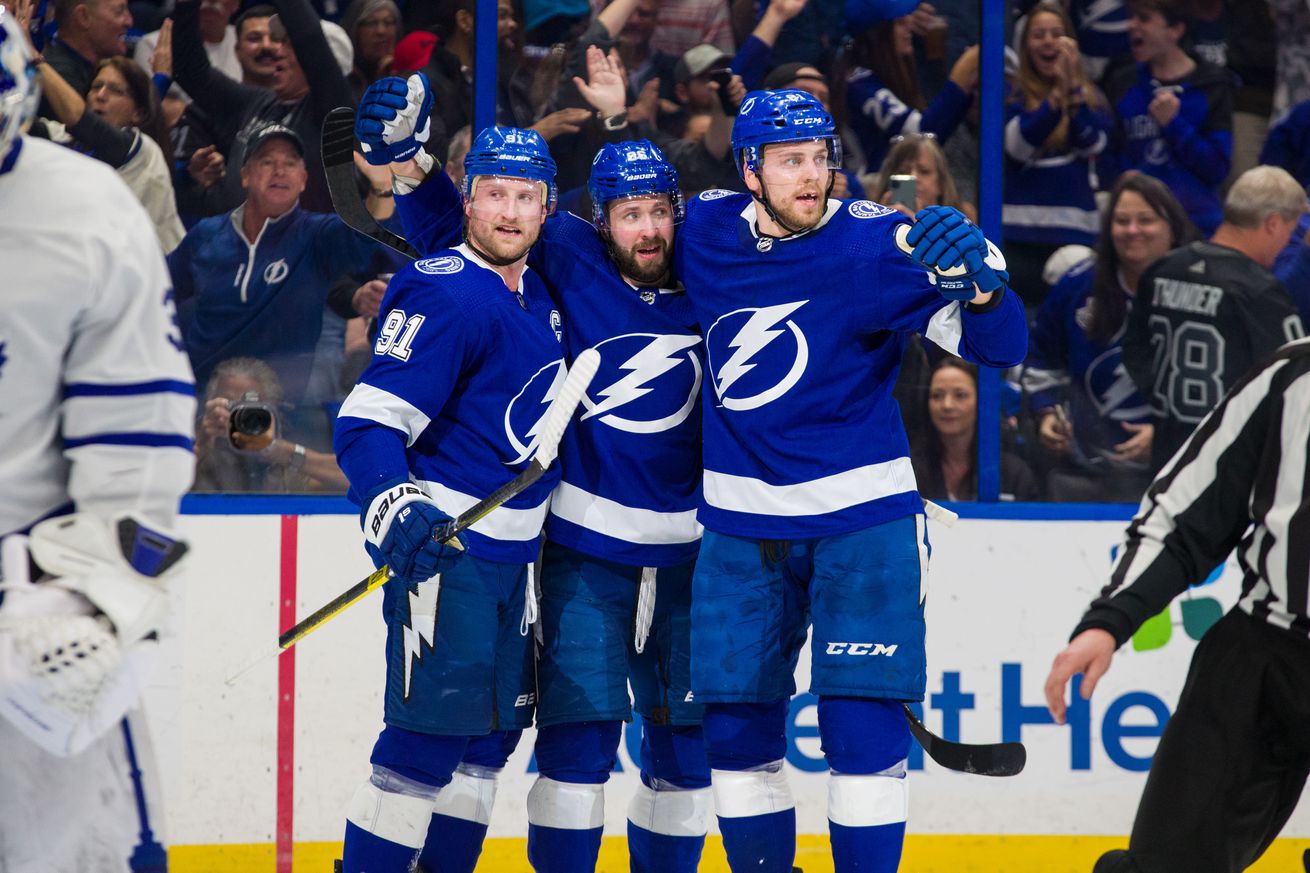 TAMPA, FL – FEBRUARY 25: Nikita Kucherov #86 of the Tampa Bay Lightning celebrates his goal with teammates Steven Stamkos #91 and Erik Cernak #81 against the Toronto Maple Leafs during the first period at Amalie Arena on February 25, 2020 in Tampa, Florida. | Photo by Scott Audette /NHLI via Getty Images

Today, Monday July 13th, is the official start of Phase 3 in the NHL’s Return to Play Protocol. Training camps officially open across North America as 24 teams of the league’s 31 begin to prepare for the NHL Playoffs.

That includes the Tampa Bay Lightning, who are about as all-in as you can ask for and who have time against them as the COVID-19 pandemic has done several numbers to the NHL’s cap situation for the coming years.

On Sunday, the Lightning announced their 29 skaters and four goalies that will be attending “Summer Camp” at AMALIE Arena ahead of the Phase 4 Bubble Playoffs in Toronto on August 1st.

Some notes on the roster. The Lightning have brought 19 forwards, 10 defensemen, and four goalies to camp with them. They will need to cut one forward before the group heads to Toronto as there’s a roster limit of 28 skaters allowed per team (unlimited goalies). Here is the roster:

On top of the regular season roster that finished the shortened season, the Lightning have added six skaters and two goalies to their numbers. Those players include: ABB, Joseph, Smith, Volkov, Witkowski, Foote, and the two goaltenders Martin and Wedgewood.

The following players were left off the Training Camp roster that were technically eligible as they have contracts for the 2019-20 season.

The Lightning have also released their schedule for the next two weeks. The 33 players attending camp will be split up into two groups and will participate in practices and scrimmages until July 27th when they’re expected in the Bubble. There will be two scrimmages in the first week, then two game simulations in the second week.

Chris Johnston of Sportsnet reported on Sunday night on the Steve Dangle Podcast that the Lightning are attempting to create their own mini bubble for the players during training camp. The team wants the players to reduce the risk of contracting the virus during their time in Tampa until the team can retreat to a more organized and secure bubble during Phase 4.

The League has left teams to fend for themselves during Phase 3 so the Lightning are taking extra precautions, including offering to send groceries to the players so they don’t have to go out to shop.

Tampa is taking more extreme caution during training camp (creating a mini bubble). Players and teams are told to exercise extreme caution; teams are offering to get players groceries so they don’t need to leave during phase 3

General Manager Julien BriseBois spoke to the media on a phone call over the weekend to discuss the Return to Play and the Lightning’s plans. JBB is excited for the Lightning to write their own story this summer after a 142 day wait.

“What I do know is I’m really grateful that we’re going to get a chance to finish writing our own story here. It would have been a shame for our team, for the story of our team during the 2019-2020 season to not get a chance to write our own ending and have that opportunity being taken away from us. And that was certainly a possibility considering what’s going on in the world right now.” – Julien Brisebois, NHL dot com