Two members of the Buccaneers’ most recent quarterback depth chart are now signed for 2021. Ryan Griffin is back in the fold. The longtime Bucs third-stringer re-signed with the defending Super Bowl champions Tuesday. 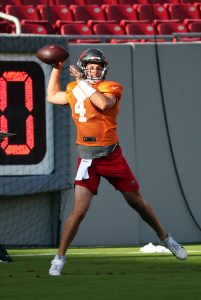 Griffin has been with the Bucs since 2015, serving as by far the team’s longest-tenured quarterback. The 31-year-old passer is in line to return for a seventh season in Tampa, rejoining Tom Brady ahead of his second. As Greg Auman of The Athletic points out, no Bucs QB has lasted seven seasons with the team previously (Twitter link). Griffin would certainly make for an unusual first.

As for Griffin, he has suited up for two games in eight NFL seasons. The former Saints UDFA caught on with the Bucs as a 2015 waiver claim. The Bucs tendered the Tulane alum as a restricted free agent in 2017 and have since given him three new deals. Although Licht’s comments give Gabbert a clear path back to the Bucs, Griffin is currently penciled in as Brady’s backup. He stands to see plenty of time in the Bucs’ three preseason games, with Brady unlikely to play much in the league’s revamped exhibition slate.